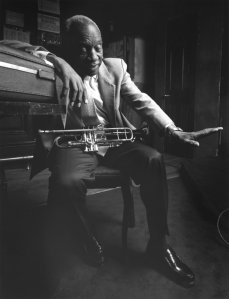 Back in the late 90’s and early 00’s I played many gigs with the Smithsonian Jazz Masterworks Orchestra, based in Washington DC. In those days their budget allowed them to bring in some players from out of town for a few days of rehearsals and performances at the museum. Trombonist Sam Burtis was a steady member of the group, and we would often carpool. Sometimes Joe Wilder would be on the gig too; we’d pick him up at his apartment building on Riverside Drive early in the morning on our way to the 1pm rehearsal in DC. He’d step out into the sunlight lugging a huge heavy suitcase (“I’m just bringing some camera gear”), and he’d ALWAYS be dressed in a jacket and tie. That was his personal dress code, even for 5 hours of sitting in the car.
And those 5 hours would be filled with great stories. A lot of happy stories about working in the Lucky Millinder band, travelling with the Basie band, stories about his family, about his colleagues from years of work in the NYC recording studios and television business. And a lot of not-so-happy stories about his time in the Marine Corp in the late 40’s- before integration, about helping to break the color line in the Broadway pit orchestras, and countless difficult episodes with small-minded bandleaders and music businessmen.
Joe was ALWAYS even tempered and gracious, and he carried himself through life and through music with the highest integrity, but he was very sensitive too. He might tell a 40 year-old story about a disgustingly selfish bandleader and you’d hear some real anger in his voice. But then you might meet him on a casual swing dance gig – and he’d have a plate of home-baked cookies to share with the band. 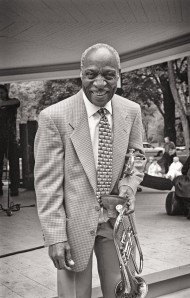 His professionalism, his collegiality, and the brotherly warmth he brought to every gig made a lasting impression on me and I’m greatful to have known him him.
More info about Joe here and here. This looks like a great book.
More info about the memorial service here.